This has been a surprisingly busy week. So much of the news that resonated with me in my feed happened in the past 36 hours or so. In addition to winning a new client – strategic counsel for a crowdfunding campaign, details coming this fall – I completed my first eBook and sent my first born back to university. The second one is here until Labour Day. Thank goodness! I’m not sure I could handle both of them leaving at once.
As always, please share your feedback in the comments. What’s on your agenda for the last weekend of August?  Happy Friday!

This week our hearts go out to the people of central Italy who were at the mercy of a devastating 6.2 magnitude earthquake on Wednesday. Latest reports from CNN show 241 people were killed and 360 were injured but many are still missing under the rubble. Facebook’s Safety Feature has been activated to alert family and friends that their loved ones are safe. People in Italy and around the world shared news and showed their support with the hashtags #PrayforItaly and #terremoto (Italian for earthquake).
To show your support you can donate to the Italian Red Cross or participate online with tributes to the victims of the Italy earthquake.

Canada Cracking Down on Disclosure for Online Influencers

Well, IMHO it took long enough. Although the FTC has regulated disclosure of material relationships by online influencers for several years and non-compliance results in large fines, the only governance in Canada has been self-governance whereby “best practice” has been to disclose. The penalty was risk of losing credibility or trust. Some of us would argue that’s a huge price to pay. Starting next year, guidelines set by Advertising Standards Canada (ASC) will require bloggers and other social media influencers to provide full disclosure of any paid endorsements or mentions of products and services, in other words, all sponsored posts.
As reported in Canadian Business, “Endorsement or testimonials must disclose any material connection between the endorser, reviewer or influencer and the entity that makes a product or service available,” says Janet Feasby, vice-president of standards at ASC. “If there is a connection, it must be clearly and properly disclosed in proximity to the representation of the product.”
There is no word on whether non-disclosure will result in fines. In Canada, the ASC can’t set fine, Competition Bureau has rules that govern “misrepresentation and false advertising” but hasn’t stated whether or not they’ll do so. They have taken action and last year, a media company was fined for fake reviews.

If you can’t beat ’em, join ’em! Google hasn’t had the best track record in sustaining a social network… with one exception… YouTube. Despite huge forays by Facebook, Twitter, Snapchat and others into native video and live streaming, YouTube still remains on top by quite a margin (serving 500 million hours of video to users per day versus 100 hours for Facebook). So, instead of overhauling Google+, Google is bringing more social functionality to YouTube in a “timeline” format. Internally known as “Backstage,” YouTubers will be able to share more than videos with their fans. Functionality will extend to text posts (blogs?), photos, polls and links. It’s expected we’ll see Backstage rolled out by year end.

#NationalDogDay
In honour of National Dog Day, check out Maggie our office manager. How are you celebrating today? 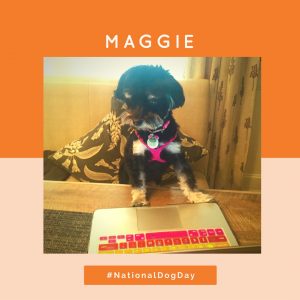 This week, Ada’s Sisters is celebrating its first anniversary. It’s hard to believe Angela and I have been sharing our thoughts about women and digital culture for a whole year! As I mentioned on last week’s Weekly Download, BLAB and Google Hangouts are going the way of MySpace, but Facebook Live is stepping into the vacuum with a new feature. The Olympics have wrapped up, and like everyone else, we think the ladies were the main story in Rio. From Penny Oleksiak to Fu Yuanhui to Simone Biles, there is so much to talk about in changing the culture of reporting on women in sports. Sara Benincasa may not be household name…yet, but the comedian had a response to fat-shaming on medium that we think deserves some attention. As does the Lindsey Lohan video no one seems to be talking about – it was an assault, it was caught on camera, and for some reason, it’s totally under the radar. And we wrap things up with Code Club Senegal, a brilliant project to get women in West Africa coding. Listen up! And, if you like what you hear, please give us an anniversary present by reviewing Ada’s Sisters on iTunes.